Peter Harmon was born in Skog parish in Hälsingland. He was born as Per Persson Löthberg. His Christian name was Per. His father was Per Norrbo and as the boy was Per's son, his surname of cource became Persson. This had been the normal way to name the children in Sweden for many centuries. This custom ended around 1900. He took his extra name Löthberg from the village where he lived, Löten.

In 1852 he emigrated together with his family to America. They sailed on the brig Maria from Gävle July 19 and arrived in New York October 4.

Why he changed his name to Harmon we probably never will know. In 1860 The family lived in Webster, Iowa. In 1870 they lived in Boone, Iowa.

Map over Skog in Sweden. 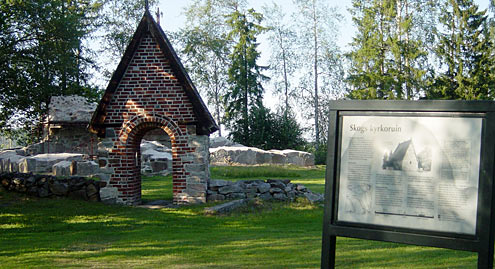 The community Skog has a powerful religious history. From the current church ruin of St. Olof's chapell on Kyrkudden in Lake Bergviken there goes pilgrimage route to Trondheim (Nidaros) in Norway. In Skog's Church from 1805 was found during an inventory in 1912 the famous Skog-tapestry from the 1100s. In the church there is today a copy, the original is at the Historical Museum in Stockholm.